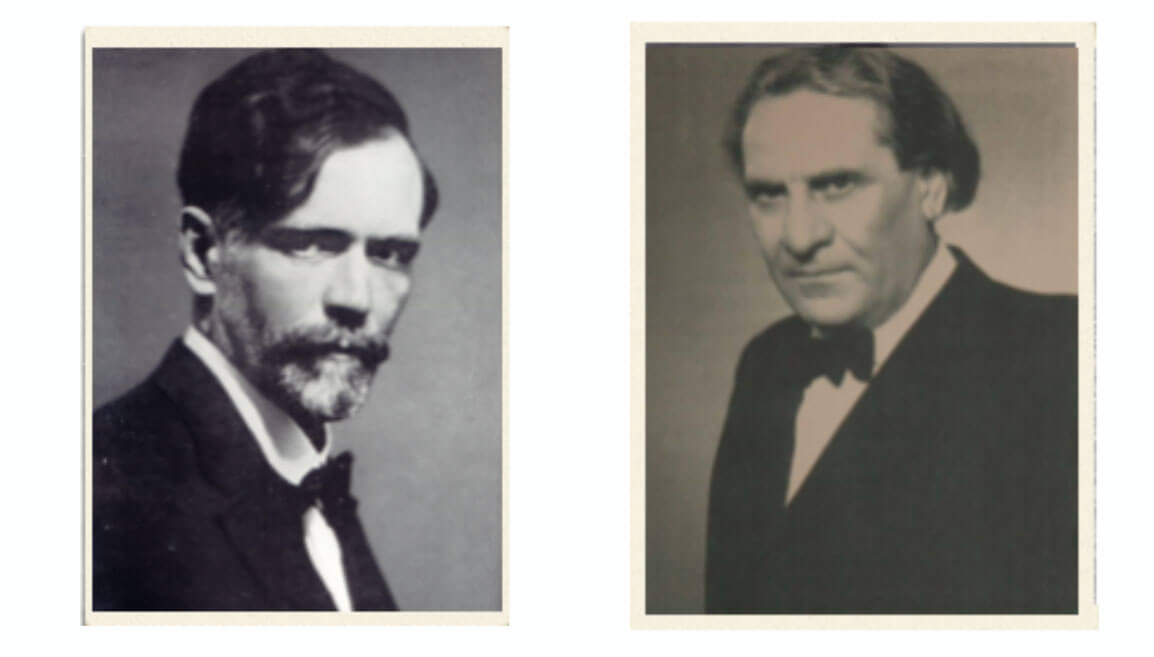 “In grades I and II students were occupied with dialogue songs, echo songs (two groups, two tone colours), simple two-part rhythm exercises, and antiphonal melodies written in the board. There is a wealth of material for dialogue and antiphonal melodies suitable for third grade. (...) Children find great enjoyment singing them, and it is through frequent participation in such activities that life and fresh air flows into the music class.”

Performance of rhythm progressions with changing of the timbre 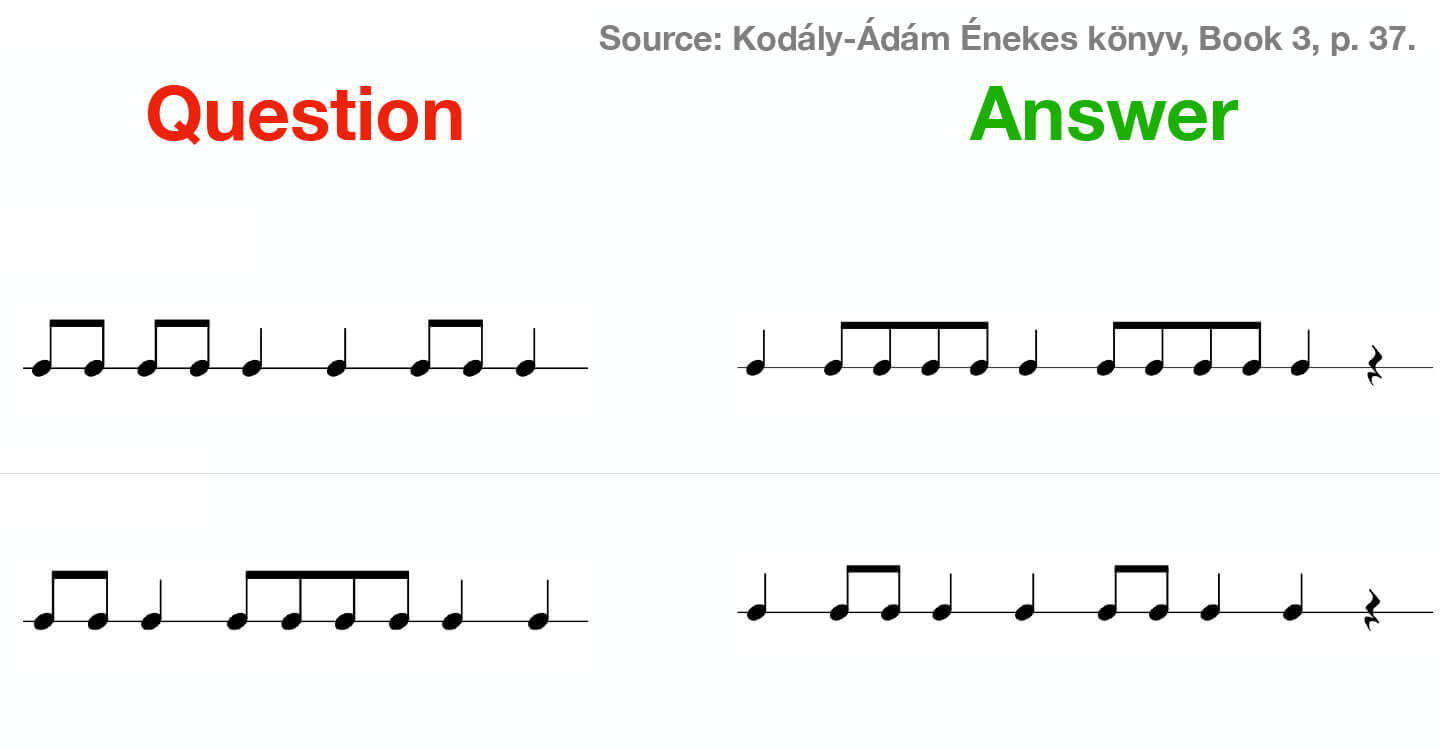 Two-part “knocking” and other rhythm exercises 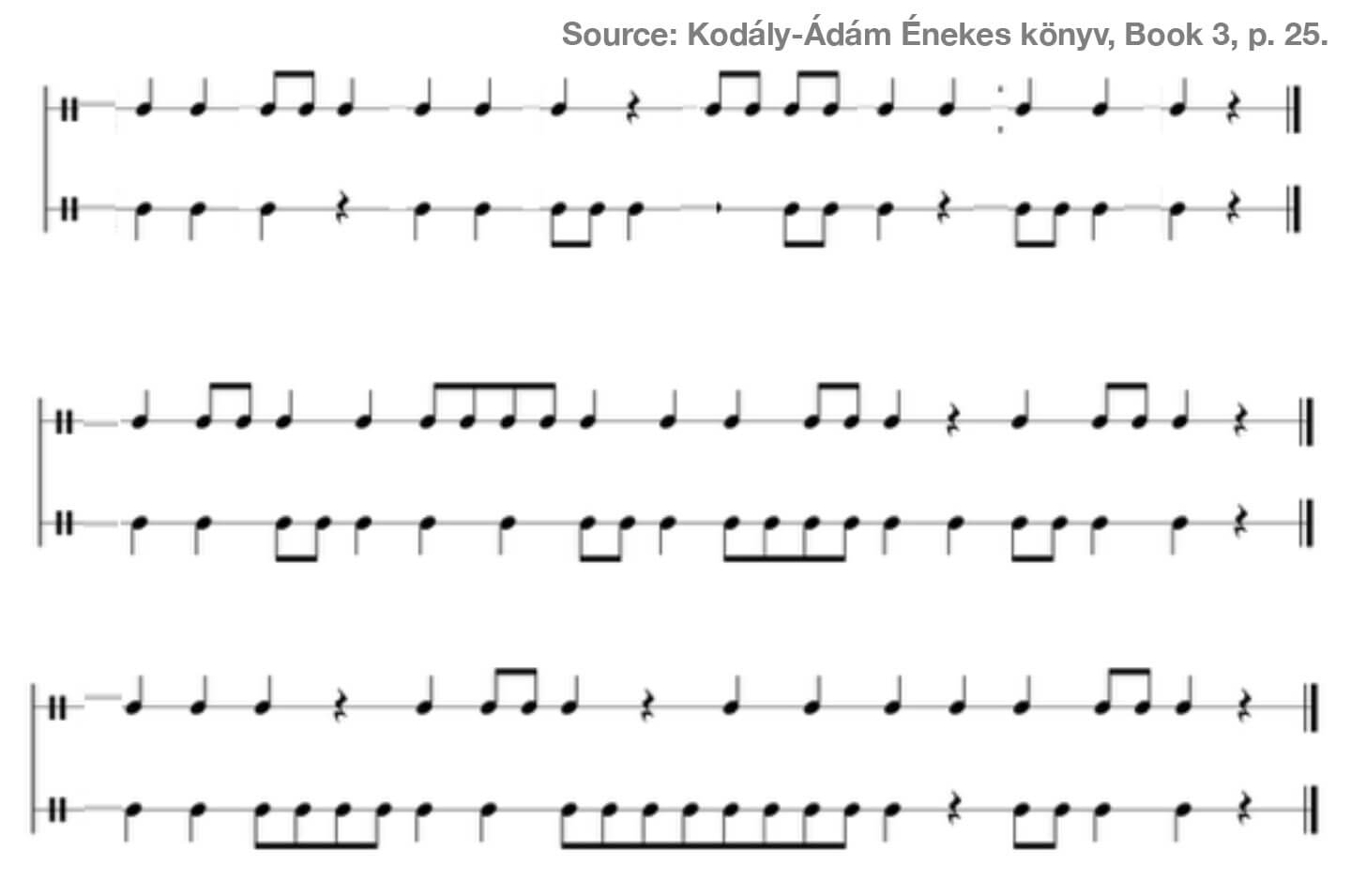 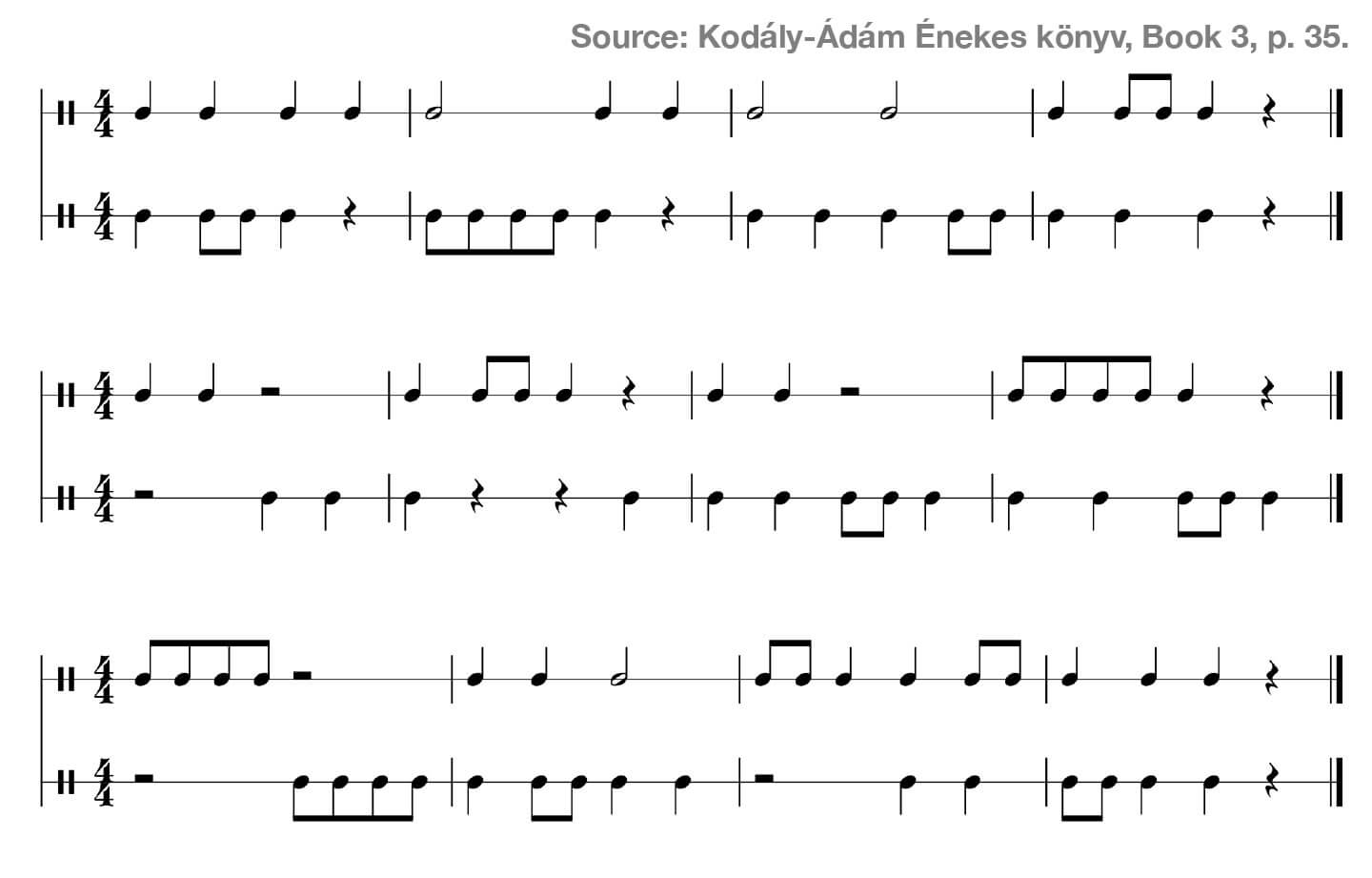 “The objective is to lead students not only toward singing polyphony, but to develop also a precise and secure intonation in two parts. To sing one part with clarity is a difficult task, while in two-part singing the parts support and adjust one another. [...] Instruments are of no help. On the contrary, an instrument will become a constant crutch which later may become indispensable. It is also harmful, because in tempered tuning our instruments do not possess a single natural interval beyond octaves, to say nothing of the fact that a well-tuned instrument is a rarity in schools.” (Kodály’s words as taken from Jenő Ádám: Growing in Music with Movable Do, p. 130.)

These fragmented melodies have to be sung in a slow tempo, students should respond with utmost attention paid to the dynamic changes. 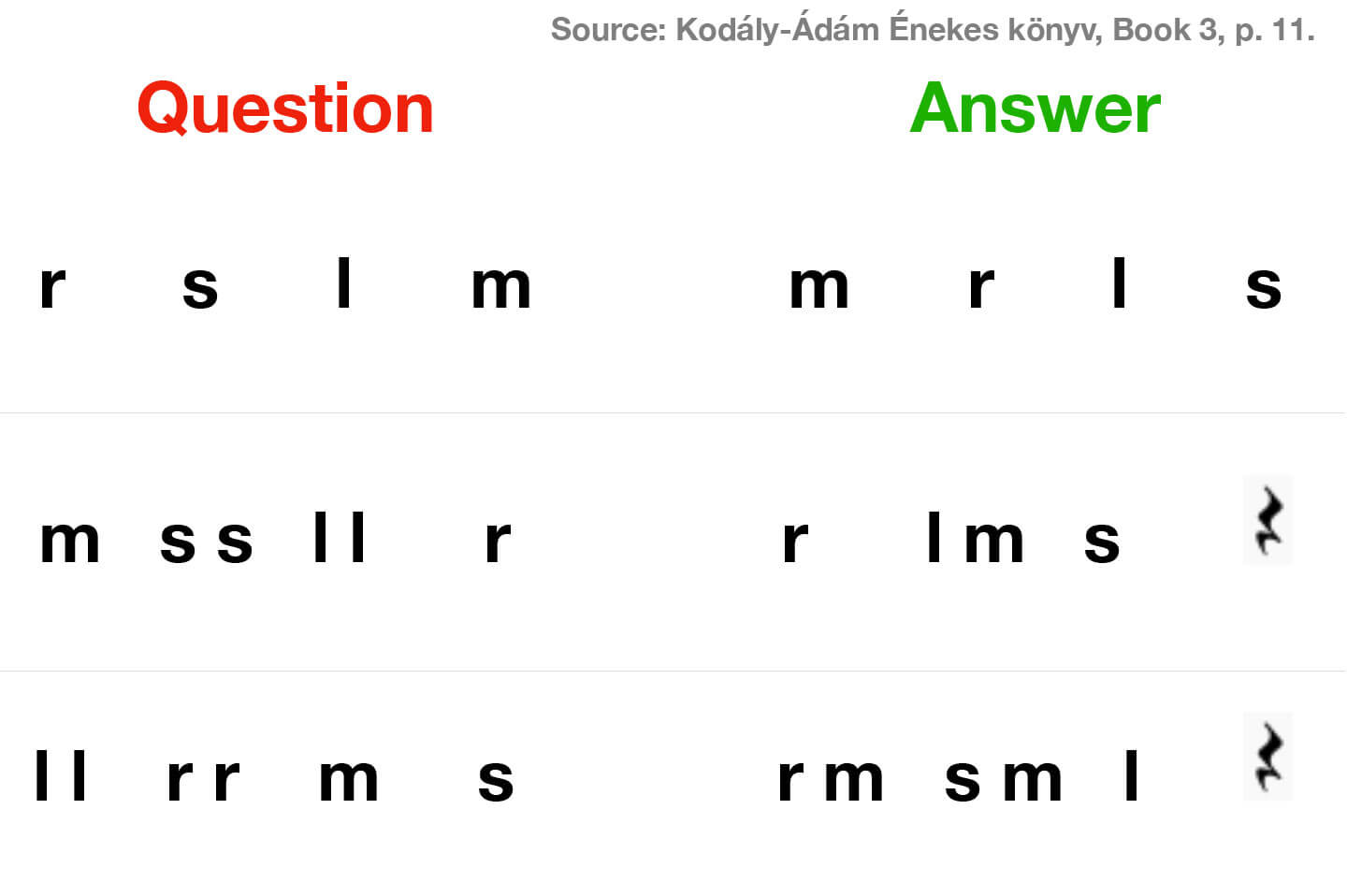 In this exercise pupils repeat very softly what the teacher has sung.
Later similar motives can be performed by two groups or just by two children

“Imitative two-part singing is now extended to a form of harmonising whereby one part sustains one note while the other part slowly sings a few notes. Such exercises may also be directed with hand signals.” (Jenő Ádám: Growing in Music with Movable Do, p. 133.) 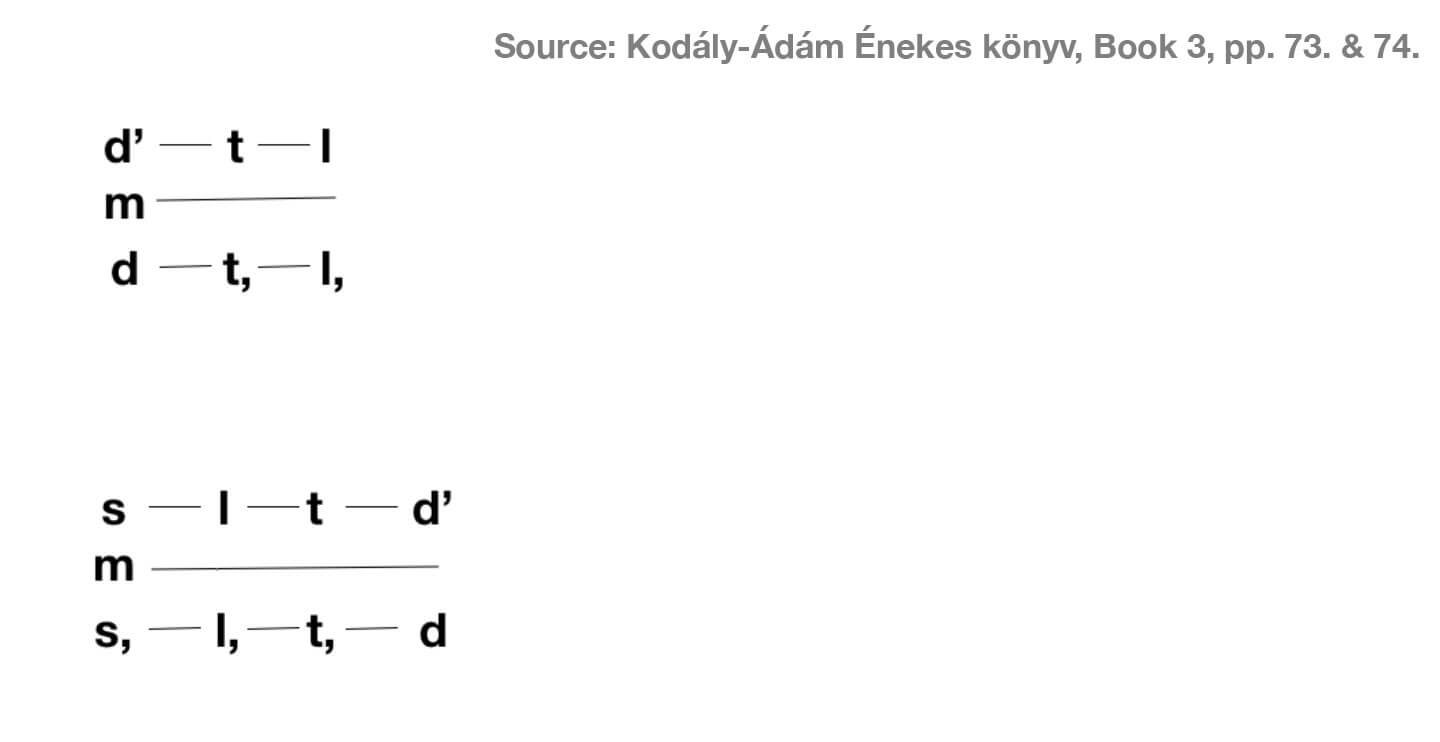